The new matchup is to feature the SEC vs. the Pac-12

Boy were we wrong, and we should have seen this eons ago.

College football reporter Brett McMurphy is reporting that in 2020 the Las Vegas Bowl will feature an SEC team and move to a post-Christmas time slot. 2020 is the first year of a new bowl cycle.

“Every Power 5 conference wants in this game because of the new stadium and location,” a source told McMurphy.

This is a big blow to the Mountain West as this matchup was its only regularly scheduled bowl game to go up against a Power Five team, even if sometimes it was a mediocre one at best. Betting those Pac-12 teams did give the conference a bit of pride.

The Mountain West has been part of the Las Vegas Bowl since 2001 and for the first five years sent the second place team, but since then it has typically been the champion unless that team qualified for a BCS or New Year’s Six Bowl game.

The bowl game also has been affiliated with whatever conference UNLV was in dating back to its Big West days in 1992.

The potential replacement spot for the champion could be the Arizona Bowl, which is not all that appealing as it pays in mid six-figures compared to seven that the Las Vegas Bowl pays out.

That bowl game is just a few years old and was streamed online its first year with opponents hailing from the Sun Belt or Conference USA team. Perhaps that game could get a better opponent and TV deal with the Mountain West champ involved, but don’t hold your breath for it being a Power Five team.

This would drop the Mountain West to one fewer bowl game but there is talk of a new bowl — gag — in Tempe at Sun Devil Stadium but nothing is confirmed with that matchup.

Overall, this is a huge blow to the conference because this bowl game usually was one of the first of the bowl season, on ABC and featured the top broadcast crew from ESPN.

Now, the league is once again pushed down another peg as the divide widens between the have’s and have nots in college football. Not sure what commissioner Craig Thompson and staff have in plan but something dramatic needs to be done with this loss. Perhaps the Arizona Bowl could pit a similar Power Five opponent like the Las Vegas Bowl or maybe the top AAC team.

One has to wonder if the league knew about this, or at least should have seen it coming, and discussed the bowl loss in the recent meeting with the board of directors preparing for the future of the conference. 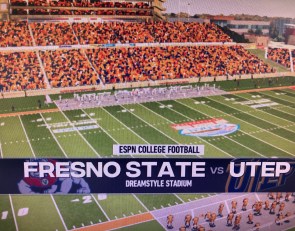