The Bulldogs return a key piece for 18-19

The Bulldogs will be a threat next year.

Fresno State basketball received some good news as guard Deshon Taylor decided to return to the Bulldogs program for another year as he told ESPN’s Jeff Goodman.

Fresno State guard Deshon Taylor has pulled his named from the NBA Draft and will return for his senior season, per reports. Taylor averaged 17.8 PPG last year.

Taylor was testing the NBA waters but the 6-foot-2 guard was a long shot at best to be drafted, and he was not even being considered as a seccond-round draft prospect.

He wanted to go through the process without an agent to see where he stood, but as it became more clear he would likely not get picked in June he is returning to school.

This is great news for new Bulldogs head coach Justin Hutson, who comes from San Diego State where he was an assistant with the Aztecs for a number of years.

Having Taylor back vaults Fresno State into the top third of the conference and in the tier of Nevada, San Diego State, and New Mexico. Look for Taylor to be a preseason first-team selection and in the running for the best player in the Mountain West next season. 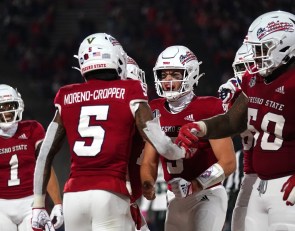 Fresno State vs. UNLV: Keys To A Bulldogs Win, How To Watch, Odds, Prediction