Nick Bawden has had a windy career at San Diego State. Recruited as a QB out of Los Gatos, CA to compete at QB in 2014. No one talks fondly of the Quinn Kaehler-era at San Diego State. Bawden started in two games in 2014, but followed coaches’ advice to switch from signal caller to run blocker. Despite the challenges of switching to a new position mentally and physically, Bawden has made a name for himself as a bruiser, looking for someone to hit on the other side of the ball.

He has embraced the fullback role and has a knack for finding that first guy, and opening the lanes for his running back. He follows through with contact. Tough guy to get around. Knows his run assignments. Can catch out of the backfield in open space.

Pass protection is not his thing. Bawden has built his resume on run blocking, but not as much for pass protection. Not a speedy nor agile guy. If he gets the ball, he plans to bulldoze you. Shaky at h-back roles at the next level.

Bawden has built a career inside the pro-style offense. There’s no gimmicks to his game, and he is good at his job. His ceiling is to get drafted in the later rounds, his floor is that he goes undrafted and works his way to get onto a squad. 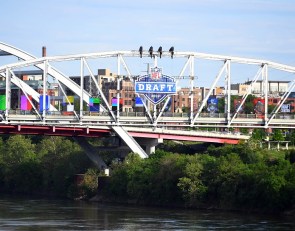 College Basketball Games that We Can’t Wait to Watch

New Mexico Unable To Practice Despite College Basketball Having A Return Date Lobos unable to hit the hardwood just yet. (…)

Mountain West To Resume Play On Oct. 24? Reports have football back before Pac-12? Contact/Follow @JeremyMauss & (…)

PODCAST: Does It Matter If AAC Plays Football While Mountain West Does Not?

Air Force To Officially Host Navy In Football This Fall

Mountain West Looking To Play An Eight-Game Schedule, Per Report