Brown will be heading to the Big 12.

Brown is heading to the Big 12

Former Hawaii signal-caller, Dru Brown, has decided on his final year of eligibility and he is going to the Big 12 to play for the Oklahoma State Cowboys.

Ask and it will be given to you; seek and you will find; knock and the door will be opened to you.
Matthew 7:7

Grateful for the opportunity to play for Oklahoma State University in my final season #HumbleBeginnings #GoPokes pic.twitter.com/yR4PGluOxz

Brown announced he was leaving Hawaii in January as a grad transfer and going to the Cowboys program is a good fit for him. Oklahoma State is in need of a new quarterback as Mason Rudolph has graduated and will be in the NFL next year.

Brown is eligible right away and will be competing this spring and fall with senior-to-be Taylor Cornelius and Keondre Wudtee. The Cowboys offense also fits Brown’s skill set as it is wide open, spread and will allow for whoever is under center to sling the ball a lot and have the chance to have big numbers.

At Hawaii, Brown passed for 5,277 yards, 37 touchdowns, 15 interceptions and completed a solid 62 percent of his passes. 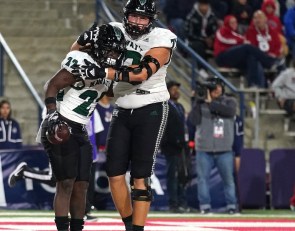