Get To Know Central Michigan

Will this be a low scoring game?

On December 22, the Famous Idaho Potato Bowl will match Wyoming (7-5, 5-3 MW) against Central Michigan (8-4, 6-2 MAC). To get to know more about Central Michigan, I reached out to James H. Jimenez of Hustle Belt, SBNation’s blog dedicated to all things Mid-American Conference.

MWWire: Most Wyoming fans haven’t seen a Central Michigan game this season, what will Wyoming fans see schematically from the Chippewas offense and defense?

Jimenez: Schematically, CMU employs a spread-style offense predicated on the run and the quick pass and a traditional, but aggressive 4-3 defense which seeks to create turnovers.

Shane Morris, the Michigan grad transfer, has been a solid player at QB for the Chippewas, only getting better as the season progressed. Thus far on the season, he’s thrown for 2,908 yards for 23 touchdowns and ran for an additional three. He’s about a coin-flip in terms of completion percentage, currently standing at 55.8, but when he’s on, he’s on. CMU will lull you to sleep with runs up the middle or screen passes which rely on the athlete to get out in space, and then launch bombs down the field to keep the defense honest, and Morris is the best quarterback to run said offense, as he has just enough of a running threat to force the defense to hesitate on option looks.

On defense, expect a pressure look from the CMU defensive line and lots of physical man-to-man coverage on the corners on passing downs and a zone look on rushing downs. They’ve been wildly successful at causing turnovers, especially interceptions, by forcing quarterbacks to make quick decisions and taking advantage of the ensuing confusion. The Chips are the best in the country in takeaways, which is something a recently-gimpy Wyoming offense should be concerned about, Josh Allen or no.

MWWire: Who are the Central Michigan players that Wyoming fans should be looking out for on Friday?

Jimenez: I’ve already talked about Morris on offense, but a lot of his success can also be contributed to his weapons. The name which immediately comes to mind is Corey Willis, who recently passed the legendary Antonio Brown for career reception touchdowns. Willis is CMU’s best deep threat on the outside and is usually the receiver of choice on play action calls, securing 42 receptions for 625 yards and nine touchdowns in eight games. Tight end Ty Conklin, who has also had an injury-hampered season, has 28 receptions for 406 yards and five touchdowns in seven games.

Jonathan Ward should also get a good amount of attention at the halfback spot. He really bloomed in 2017 after originally being the change-of-pace back behind senior Devon Spalding, who struggled with injury all season. Ward ran for over 130 yards and five touchdowns in three of his last four games, and has shown flashes of brilliance as a receiver, too. He’s at 1,349 total yards and 11 total touchdowns on the season and is perhaps CMU’s most dangerous player moving forward.

On defense, Amari Coleman and Josh Cox (who moved from corner to safety in the offseason) will be the two defensive backs the Wyoming offense will look to limit. Both players specialize in shutdown coverage, but are also extremely good ballhawks, accounting for nine of CMU’s interceptions on the season. Joe Ostman was a first-team all-conference selection and (in my opinion) had an All-Americanesque body of work, nearing the top of the FBS with 12 sacks. He’s the motor on which the rest of the defensive line takes its energy from.

MWWire: This bowl invitation process has been an emotional roller coaster for Wyoming fans. Many were hoping for a bowl invitation to come from a warm weather city and then rumors started popping up that the location was going to be Boise. After the Boise news broke, Brett McMurphy reported that Utah would be the opponent and fans were excited to play an old rival. Finally on bowl selection day, it was reported that Utah was pulled and replaced with CMU which led to more disappointment. Once the dust settled, most fans are happy that UW will be playing in back to back bowl games and are satisfied with facing a quality opponent like Central Michigan. How do Central Michigan fans feel about playing Wyoming? Is the fanbase excited about travelling to Boise for the game?

Jimenez: I might be speaking for just myself here, but I’m really excited for this matchup. Both these squads are extremely similar in terms of talent levels and feature many future professionals. Most fans will probably look at Wyoming and say “eh, not feeling it”, but after last year’s massacre at the hands of Tulsa in Miami, we’ll take a more intriguing matchup. CMU is about to go to its third-straight bowl under John Bonamego, so there’s a lot of optimism surrounding the program no matter the opponent. Fans are especially excited that CMU might have a chance in this matchup; they were heavy dogs in Miami and Detroit in previous years.

As for traveling to Idaho, most fans aren’t particularly keen on taking the time to go out to Boise. That’s unfortunate, because I have family who lived there for years and it was always a good time whenever I went to Boise. But Boise is not Detroit, which is where many fans were excited to go to. I’d bet the fans that do go out to Boise will be pretty excitable; CMU is one of the rowdier fanbases in the MAC and usually travel pretty well.

MWWire: Most Mountain West fans don’t know a lot about the MAC other than the unique TV schedule that televises their games in the middle of the week. The MAC has had some big seasons in the past few years from Northern Illinois and Western Michigan. How would you compare the quality of the MAC as a whole against the other group of 5 conferences? Is Central Michigan’s 8-4 record more about how good of a team they are or more about a lack of quality opposition?

Jimenez: It hasn’t shown in bowl match-ups in recent years, but the MAC is a pretty quality football conference. I’d put it on par with the Mountain West at least. The MAC West, especially, has been a gauntlet. Toledo (the MAC champ), Northern Illinois, Western Michigan and CMU all hail from the West and many prognosticators (myself included) felt these were the best four teams in the conference. So you certainly can’t say it’s a slouchy schedule.

CMU had an up-and-down conference season, but showed a lot of fight. A 3OT strugglefest vs. Rhode Island wasn’t ideal to start the season, but they won the game and found out a lot about themselves in that game. The Chips also lit up Kansas on the road and kept up with Syracuse with over half the second team offense starting for three quarters. They managed to win on the road vs. both Ohio, the preseason MAC East favorite, and WMU, last year’s MAC champion, while preventing NIU from winning the MAC West in the final game of the season at home.

Their only truly bad losses were to Miami, who was considered a dark horse squad before the season started but ultimately finished 5-7 after a season which saw a bunch of bad breaks, and an expected trouncing vs. Toledo, who flirted with a New Year’s Six bowl for most of the season.

CMU’s middle part of the season was brutal from an injury standpoint, losing many of its biggest contributors (including Willis, Conklin, Ostman, Spalding, Brandon Childress, and Eric Cooper) at the start of the conference season and very well could have gotten nine or even 10 victories on the year if they were at full strength. Don’t underestimate CMU.

MWWire: What is your prediction for the game?

Jimenez: This game is a pick’em or a -1 at most gambling places I’ve seen and I feel like that’s appropriate. It’ll be a must-see game which places two explosive and opportunistic squads with a lot to prove after both squads just couldn’t find their way into conference titles. Josh Allen is a legit NFL prospect and he’ll get perhaps his biggest test of the year defensively with Coleman, Cox, Sean Bunting and Alex Briones all looking to make plays on every pass he throws. CMU will also get a chance offensively to show that its pace can exhaust a great interior defense that Wyoming exhibits.

I really don’t like to try and predict scores, but I would be surprised to see a gap of more than 10 at the end of the day.

Thank you so much to James H. Jimenez and the Hustle Belt for their insight on Central Michigan and MAC football. You can follow James on Twitter @AVKingJames and @HustleBelt . 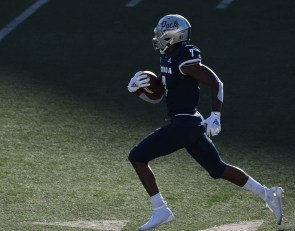 Famous Idaho Potato Bowl: How To Watch Nevada vs. Tulane 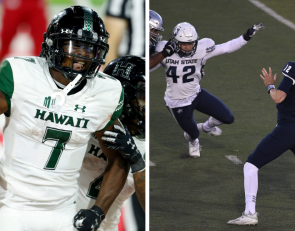 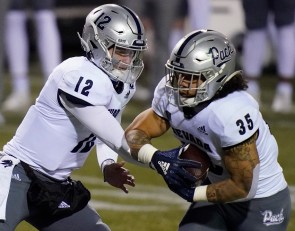 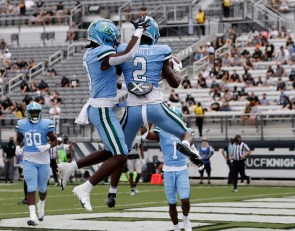