What are the biggest needs that the Rainbow Warriors need address this offseason?

Take a look at the top five positions that Nick Rolovich will look to improve.

There is no doubt in my mind that Hawaii wants to be at the top of the Mountain West Conference with the likes of Boise State and San Diego State. However, the program cannot accomplish such lofty goals without creating a strong foundation from their recruiting.

That journey begins today with the first early signing period in NCAA football history. From early this morning until midnight EST on Friday, teams are free to secure the foundation of their program’s future. This is a part of a new era in college football, and it will be fascinating to see how this unfolds. Hopefully, this new addition to the recruiting process will help Nick Rolovich and his quest to revive the UH Football program.

Much like what the coaches have already done, let’s identify some of the team’s top needs. Here are five of the team’s most glaring holes that need to be filled this offseason:

1. Defensive Line: Most, if not all, Hawaii fans have been well aware of the depth issues the program has had along the defensive front. Nick Rolovich made a valiant effort to add talent to the position group, but due to various reasons, the group was thinned out. Combine the shallow depth with their two best and most productive players graduating, David Manoa and Meffy Koloamatangi; the defensive line will be reeling.

A combination of underclassmen and JUCO transfers, at least two of each will be ideal. Losing two of your best pass rushers will require replacements but it may be just as if not more important to find a run stopper. The Rainbow Warrior defense kept getting throttled when facing the MWC’s top rushers. A powerful presence to help with gap control will go a long way to remedy that.

2. Wide Receivers: After losing John Ursua in the San Jose State game, it was quite evident that there was a severe lack of depth in the receiving corps. Many including myself questioned some coaching decisions here, including but not limited to the banishment of Devan Stubblefield.

However, he is just one man, and it seemed like no matter who else trotted out into the formations, little could get done via the passing game. In fact, they only average 204 yards per game. Some of their problems resulted from dropped passes, but the vast majority of the struggles stemmed from an inability of the receivers to get open. While Ursua will be returning in 2018, putting together a fearsome passing attack will require much more talent waiting in the wings; preferably receivers that have the speed and quickness to create separation from the defensive coverage.

3. Cover Corners: When you allow the 3rd highest passer rating to opposing quarterbacks, you bet that cornerback is a positional need. The DBs had their moments but struggled to stay with their man in coverage. Time will help them develop their strength and technique but on too many occasions the opposing receivers blew past the secondary on deep balls or easily wiggled free for a wide-open reception. For this team to defend the likes of a Michael Gallup or a Cedrick Wilson, they will need to match the athleticism of their receivers they are expected to stop. A youth movement here would be perfect for the coaches to establish and develop solid depth. The team is only losing one starter, Trayvon Henderson, and his forte stemmed more from his hitting than his cover skills.

4. Offensive Linemen: With the team losing Dejon Allen, John Wa’a, Chris Posa, and Matt Norman, finding reinforcements for the offensive front must be a top priority. However, Nick Rolovich just can’t throw any old big bodied recruit into the mix.

According to Bill Connelly’s Five Factors, for Hawaii, the offensive line was superb at run blocking, minimizing run stuffs and maximizing quality running lanes for their running backs. On the contrary, they were amongst the worst at protecting their quarterback. Adding quickness and agility to the position will aide in pass protection. When you sprinkle that in with the massive veterans like Fred Ulu-Perry, Asotui Eli and J.R. Hensley you will have a solid line. One that can help the Rainbow Warriors dominate on offense once again.

It will not be easy to secure a defensive player when he won’t even know what he is going to be asked to do. The timing of Legi Suianoa’s departure is dreadful. All is not lost though, as the conventional February signing period allows some time to do a proper search, but as a consequence, the team may miss out on some talented players.

These five positions will be critical to fill and I’m sure we all will be watching will great anticipation as the team secures their first recruits for next year. Make sure you stay tuned for more Hawaii Football news and player profiles of all of the new Rainbow Warriors. 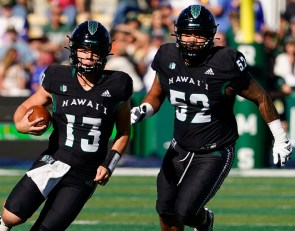 First Look At Middle Tennessee In The Upcoming Hawaii Bowl