Get to know the team taking on the Aztecs in the Armed Forces Bowl.

San Diego State has had a lot of time on their hands since their last home game on November 24. They’ve seen their rivals, Fresno State, get beat on the smurf turf and Army edge out an upset against Navy. By the time San Diego State travels to Ft. Worth, TX in the Armed Forces Bowl, it’ll be close to a month since they’ve stepped on the field for a meaningful game.

Army is riding high and looks hungry to add another win to their season. We caught up with Forgotten 5 Army football writer Alex Funderburke (@alexfunderburke) to get his perspective on the team taking the field opposite the San Diego State Aztecs.

EM: Alex, thank you for joining Mountain West Wire for this Q&A on the Army Black Knights who just beat the Navy Midshipmen. Now the Black Knights will play in the Armed Forces Bowl on December 23 against the San Diego State Aztecs. The Army Black Knights have now gone bowling and defeated Navy in back-to-back years, why are these guys playing at a high-level?

AF: Jeff Monken has recruited better than any coach I’ve seen at West Point. Not only does he get good players, he gets players that buy into what he is doing. Monken also loves his players and cares about the school and it’s students more than most coaches. It is a combination of these three that has Army playing at a high-level for the first time in 20+ years

EM: Given San Diego State has faced Air Force on a semi-regular basis and Navy in a few bowl games. What makes Army stand out from the other academy teams?

AF: Army’s version of the triple option is a bit different from Navy or Air Force, you’ll see more passing from the other two, whereas the Black Knights may put the ball in the air, once maybe twice a game. Army also has recently started running plays out of shotgun and pistol formation, they no longer just stay in wishbone or flexbone.

EM: What’s the weakest link of this Army team?

AF: Special teams, by far. More specifically, field goal kicking. Army’s field goal kicker, Blake Wilson is 3/9 on field goal attempts this season. If the Black Knights get a fourth and short and are within field goal range for the average kicker, they will almost always go for it.

EM: Who are the playmakers San Diego State should watch out for?

AF: Quarterback Ahmad Bradshaw is the leader of the offense and the team. He has 1,566 rushing yards on the season(a single season record at USMA), which is fifth in the nation. It is time Army fans call Bradshaw the best triple-option QB the Black Knights have ever had, he has led them to two winning seasons, two bowl games, two wins over Navy, a win over Air Force, a Commander-in-Chiefs trophy, and with a win in the bowl game, the school’s first ten-win season in 21 years.

Slotback Kell Walker, is a speedster who can out-run most defensive players, Walker averages 7.3 yards a carry, and is a threat to take back a kickoff whenever he is back there.

DB Gibby Gibson is the definition of clutch, when Army’s defense needs a play to be made, look for Gibson to make it. He made the stop of the year against Eastern Michigan to stop their two-point attempt to take the lead with a couple seconds left on the goal line.

EM: What’s your prediction and outcome of the Armed Forces Bowl?

AF: I expect tight game, I think Army’s offense will keep the ball out of Rashaad Penny’s hands and score when they have the ball. I also expect the defense to limit Penny(as much as you can contain a back like him). Penny will get his, by no means am I saying Army will shut him down, rather they will stop enough to where they can get that tenth win. It should be a fun game, I think Army will eek this one out.

Follow Alex Funderburke (@alexfunderburke) and check out his work at Forgotten 5. 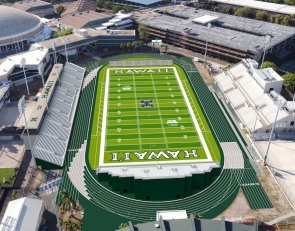 Pac-12 Is Exploring Options In Expanding Its League How does impact the Mountain West? Contact/Follow @JeremyMauss (…)

Wyoming Football: First Look At The Illinois Fighting Illini The Cowboys will open the 2022 season in Big Ten country against a very (…)

New Mexico Football: First Look At The Maine Black Bears The Lobos will open their 2022 football season against a Maine squad (…)

San Diego State Football: First Look At The Arizona Wildcats The Aztecs will open up a new era at Snapdragon Stadium by hosting the (…)