Wyoming Wilts On The Road Against South Carolina, Falling 80-64

Wyoming Wilts On The Road Against South Carolina, Falling 80-64

Cowboys Have Lost Three Of Their Last Five Games

The Pokes led for just 19 seconds

Wyoming guard Justin James led all scorers with 20 points, 11 via the free throw line. James connected on just four of his 12 field goal attempts, as the Cowboys converted just 33.9% of its shots in the double-digit loss. Lou Adams (12 points), Hayden Dalton (12 points), and Alex Aka Gorski (10 points) also finished in double figures.

Nearly a third of Wyoming’s total points came from the free throw line – 20 of 64. Wyoming turned the ball over 18 times, the seventh time this season that the Cowboys have yielded 13 or more turnovers.

Wyoming now falls to 6-3 on the year, and is no longer in the KenPom top 100. The Cowboys finish conference play with four winnable games, all at home, against sub-200 KenPom opponents (Pacific, Eastern Washington, Texas Southern, Northern Colorado). 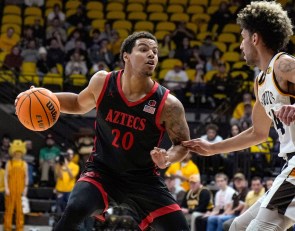