Allen has a chance to impress scouts and get drafted.

Hawaii will have its talent showcased in All-Star bowl game.

The 2017 Hawaii football season hasn’t been all that great as expectations were not met, but that doesn’t mean the team was void of talent on the islands.

Starting offensive lineman Dejon Allen has had a stellar year for the Rainbow Warriors and his being rewarded with an invite to the NFLPA Collegiate Bowl which is played in the Rose Bowl this year on January 20.

Allen was named as a first-team All-Mountain West player by the media this preseason and last year he was a second-team selection. He has been a key piece to this offensive line and helped running back Diocemy Saint Juste be one of the best backs in the conference. Saint Juste is also on track to become Hawaii’s all-time single-season rushing record and credit goes to Allen and that line.

This particular All-Star game is not on the 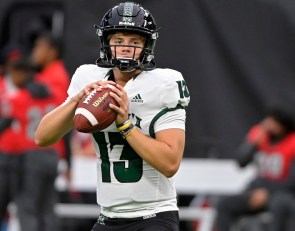