Michael Gallup Named As A Finalist For Biletnikoff Award

For the second time in four years the Rams have one of the best wide outs in the country.

Can Michael Gallup win the Biletnikoff?

Colorado State wide receiver Michael has had an amazing year for the Rams as he is first in the nation in  receiving yards with 1,245, second in yards per game with 112.1 and his 94 receptions are good enough to also be second at the FBS level.

These numbers have placed him as a finalist for the Biletnikoff Award which is given to the nation’s best pass catcher. The other two finalists are James Washington from Oklahoma State and David Sills from West Virginia. Still leads all pass catchers with touchdowns with 18, Washington has 11 scores and Gallup seven so far this year.

Washington is a deep threat as he leads this trio, and is top 10, by averaging 21.59 yards per attempt. He also leads the nation in yards per game, Gallup is second.

“I don’t know if anybody else in the country has a guy that does as much for his team’s offense as Michael Gallup does for us,” said Colorado State head coach Mike Bobo. “He makes an impact in every way at the receiver position, whether on screens, blocking, deep routes, intermediate routes or making unbelievable catches. He has the ability to take over ballgames.”

Gallup joins former Colorado State wide receiver Rashard Higgins as a Biletnikoff finalist. Higgins earned the honor back in 2014, but he did not win the award.

The winner will be announced at the Home Deport College Football Awards Show in Atlanta on Dec. 7. 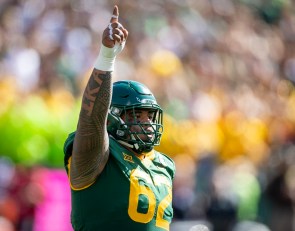 What Do You Need to Know About American Football?