BYU has often looked like one of the worst teams in the country, but could they sneak up on the Bulldogs?

The Cougars, long ago WAC foes, have slumped in 2017 but can’t be overlooked.

SERIES RECORD: The Bulldogs and Cougars are currently tied 5-5 in their series. In their last meeting on November 21, 2015, BYU blasted Fresno State 52-10 in Provo.

Much has changed in the two years since these two teams last met. The Fresno State Bulldogs were in the midst of the Tim DeRuyter downswing that followed Derek Carr’s departure, while the Brigham Young Cougars were in the midst of another consistently successful year: From 2006 to 2016, BYU won at least 8 games ten times in eleven seasons.

This year has seen something of a reversal of fortunes, though. Despite last week’s setback against UNLV, the Bulldogs still control their own path to the Mountain West title game, while an anemic offense has betrayed a stout defense en route to what will be the program’s first losing since since 2004.

Last week, however, the Cougars showed signs of life against an overmatched San Jose State team. What can Fresno State do to avoid being an upset victim yet again?

Will the defense have an answer for Aleva Hifo?

The Bulldogs haven’t often faced good tight ends this year — San Jose State’s Josh Oliver led the team in targets in their defeat against Fresno State, while San Diego State got nothing from Kahale Warring — so while the BYU can’t be characterized as explosive, it did perk up a bit in October with 14 plays of 20 or more yards over the last four games. And while freshman tight end Matt Bushman might be appear to be the focal point of the offense, he hasn’t been the most significant reason for BYU’s recent progress.

That credit, instead, goes to the sophomore Hifo, who leads the young wide receiver unit in catch rate and total receiving yards and has emerged as a reliable target in the last few weeks. Though he has just 26 receptions on the season, six have gone for more than 20 yards, and he’s averaged 17.4 yards per catch in the last three weeks. Slowing him down will go a long way toward solving the BYU passing attack.

Can the running game keep the offense out of too many obvious passing situations?

The defintion of a Passing Down, per Football Study Hall’s Bill Connelly, is “Second-and-8 or more, third-and-5 or more, or fourth-and-5 or more.” In the last month, Fresno State quarterback Marcus McMaryion has completed just 42% of his passes in those situations, averaging just 3.6 yards per attempt.

Long story short: It’s not good, and the offense might prefer to attack the Cougar defense with a heavy dose of the running game.

For anyone who watched this team last year, it sounds like a joke to say that running the football might be what this Fresno State team does best, but the numbers bear this out: They still rank 4th nationally in Stuff Rate, which means they rarely get pushed backwards, and 3rd in Rushing Success Rate, which means they often stay on or ahead of schedule. BYU ranks 111th and 98th, respectively, in these categories on defense, representing a serious mismatch.

And even if Ronnie Rivers doesn’t see more than limited action, as he did against UNLV last weekend, the other true freshman in the backfield has proven more than capable of being productive. Jordan Mims has quietly been one of the most consistent athletes on the field every week in conference play, averaging 5.3 yards per carry against Mountain West defenses. It should be worth giving him and Josh Hokit 35 to 40 combined carries and letting them hammer the Cougars on nearly every drive.

Can the defense get back to creating turnovers?

Even in last week’s win against San Jose State, the Cougars turned the ball over twice, the sixth time they’ve done so in 2017. While the overall numbers might be skewed from their horrific offensive showing against Utah back in September, this is still a team that can get careless with the football and Fresno State has shown they can take advantage of that.

This will probably come down to picking on junior quarterback Tanner Mangum, who has thrown five interceptions in the team’s last four games, a 3.7% INT rate. The Bulldogs have made a habit of making opposing Mountain West quarterbacks miserable lately, leading the conference in opponents’ QB rating in MWC play, but they’ve gone two weeks in a row without an interception (albeit against just 52 pass attempts).

However, Juju Hughes and Mike Bell, since the latter assumed the starting role at free safety three weeks ago, have played like one of the best tandems in the conference. If the Cougars decide to push the ball down the middle, don’t be surprised if these two make them pay for that decision. 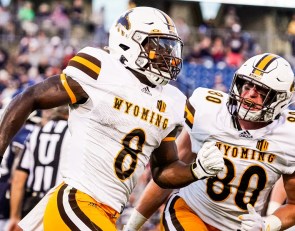 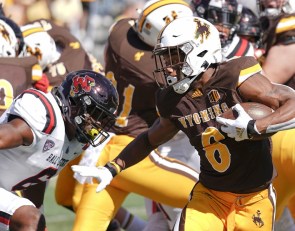 Hawaii vs. Nevada: Game Preview, How To Watch, Odds, Prediction

New Mexico vs. Colorado State: Game Preview, Keys For A Lobos Win, How to Watch, Livestream, Prediction Who will be QB for New (…)

Hawaii vs Nevada: Keys to a Warriors Win, How to Watch, Odds, Prediction

Hawaii vs Nevada: Keys to a Warriors Win, How to Watch, Odds, Prediction Can the Warriors make it three in a row vs. the Wolf (…)

Colorado State vs New Mexico: Keys to a Rams Win, How to Watch, Odds, Prediction

Colorado State vs New Mexico: Keys to a Rams Win, How to Watch, Odds, Prediction CSU looks to win two games in a row for the first (…)

Fresno State vs. Wyoming: Keys to a Bulldogs Win, How to Watch, Odds, Prediction

Utah State vs. UNLV: Keys to a Rebels Win, How to Watch, Livestream, Odds, Prediction

Colorado State vs New Mexico: Keys to a Rams Win, How to Watch, Odds, Prediction